One of the most iconic events in California’s history happened at Sutter Mills in Coloma, California, when James W. Marshall discovered glittering reflections coming from the river banks. As we know today, those were in fact gold fragments. Word spread very quickly about this discovery and so began the Gold Rush of 1848.

The news of potential untapped wealth from the minerals found in California’s soil of fortune gave some 300,000 people the hope of striking it rich in the golden state. It was not an easy journey for most, fraught with harsh conditions, illnesses and isolation. Gold fever was strong, and this singular event would forever shape California’s history.

Drinking and gambling quickly became the preferred activity for those toiling in the mines and hunting for the elusive treasure. As ever, human struggle gave way to the cruel irony found in harsh circumstances. Gambling with their lives inspired gambling with gold. Card games began to proliferate throughout the camps and California spawned a culture of thrill seekers that would give card games a name across the globe.

In the 1830’s, the game of poker began to evolve. The original 20 card deck grew and gave rise to the 52 cards we’re now accustomed to. The bigger deck could accommodate 4 or more participants in a game, allowing for a larger pot and more enticing odds. In 1848 a typical hand would consist of 5 cards, with a dealer to collect bets and deal cards.

The pot could be anything of value to the miners and tradesmen—coins, gold nuggets, even livestock was considered a viable form of currency. As poker gained popularity, the creation of poker chips made from local materials available to the miners made the game easier to standardize. Materials like bone, wood, ivory, and clay were all reliable sources to utilize as chips for betting.

The construction of saloons, hotels, and recreational halls contributed even more to the popularity surrounding the culture of gambling and drinking. One of California’s first card rooms and hotel was established in 1854 which doubled as a Wells Fargo Pony Express in 1860. The California Grand Casino, located in Pacheco CA in the east bay region of San Francisco, remains an operational establishment to this day and is a reminder of California’s passion for poker. 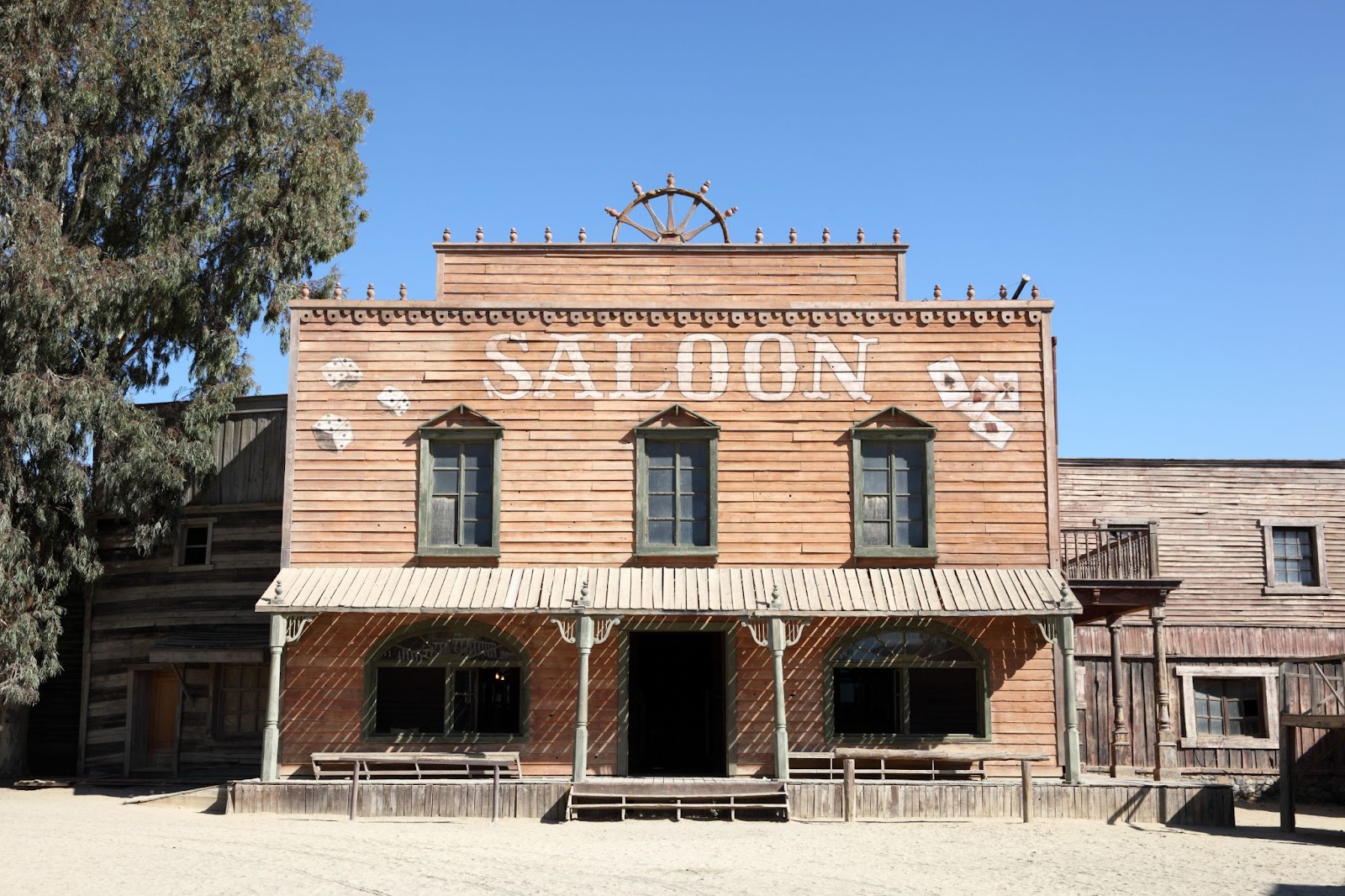 What Are California Card Rooms?

California card rooms are non-commercially operated gaming facilities that house the personnel, equipment, and casino management software necessary to give the public the ability to participate in card game gambling. California card rooms offer games such as Texas Hold ‘Em and Omaha, as well as a variety of more modern games known as Cal Games. Cal games, such as Baccarat, Pai Gow Poker, and California Blackjack are games of chance that utilize a player banker to maintain California legal compliance.

Unlike tribal gaming facilities, California card rooms must adhere to California state law and regulation. According to the State of California Department of Justice, “State law requires that every owner, lessee or employee of a gambling establishment obtain and, thereafter, maintain a valid state gambling license. The Bureau of Gambling Control (Bureau) investigates the qualifications of individuals who apply for state gambling licenses to determine whether they are suitable and to ensure that gambling is conducted honestly, competitively and free from criminal and corrupt elements.” This process ultimately determines the financial and legal hurdles of becoming a fully operational gaming facility in the state of california, and plays a huge part in the legacy of the ownership therein.

California card rooms are owned privately and abide by the legal requirements set forth by the CA Gaming Control Commission. Unlike tribal or commercial casinos, card rooms don’t have slot machines; however,  in addition to poker and Texas Hold’Em, card rooms offer versions of progressive card games like Blackjack, Baccarat, Three Card Poker and Pai Gow Poker. These games are unique in that they offer the opportunity to bet on the dealer hand against the other players, rather than betting against the house.

This caveat has been a major point of contention for lawmakers and gaming entrepreneurs alike. In 1997, the Gambling Control Act created the California Gambling Control Commission, which now regulates California card rooms as well as third party companies that take advantage of the earning potential presented by the player banked betting position. This gameplay loophole creates a unique scenario for both the players in card rooms, as well as the corporate entities that stand in as banks.

The card rooms provide the gaming infrastructure—the dealer, tables, chips and cards—and collect a game fee every hand.  The player-dealer position is offered to a different player every two hands, but is primarily managed by third party banking companies. Despite this, the opportunity to act as the bank is always on the table, providing the necessary framework to operate a game of chance legally within California’s bureaucratic framework.

Unlike these player banked Cal Games, the “holy grail” of the card rooms still remains to be Texas Hold Em’ and Omaha—if only in a close second. In these games, the house takes a share of the pot to generate revenue. The fee taken by a cardroom operating a poker game is known as a “rake”, and is generally 2.5% to 10% of the pot in each poker hand, up to a predetermined maximum amount. That said, there are also other non-percentage ways for a casino to take the rake. A typical fee structure for California casinos in a 2 / 3 game of no limit hold ’em for example, would be $6 per hand regardless of pot size (if it makes it to the flop), and another $1 if the hand makes it to the river. Some rooms take up to $7 and an additional $1 if it reaches the river.

Tournament play also generates a majority of card room revenue. Fee structures for tournaments are collected up front as entry fees, and provide gaming establishments an incentive to facilitate the logistical hurdles associated with large events. The marketing efforts and staff needed to manage multi-day events are significant, and the entry fees provide the casino a way to profit from attracting players.

Events like the LA Poker Classic—the longest running poker tournament in California—draw some of the most talented poker players in the world and host prize pools of over $1 Million. The Tournament itself pulls in almost 500 entrants each year and is an ideal representation of just how deep poker culture runs in California.

Despite controversial fee structures, card rooms remain incredibly popular in California. LA is widely regarded as having one of the best poker scenes in the world and is responsible, in part, for the surge of popularity that poker has seen over the last few decades.

How Many Card Rooms Are There In California? 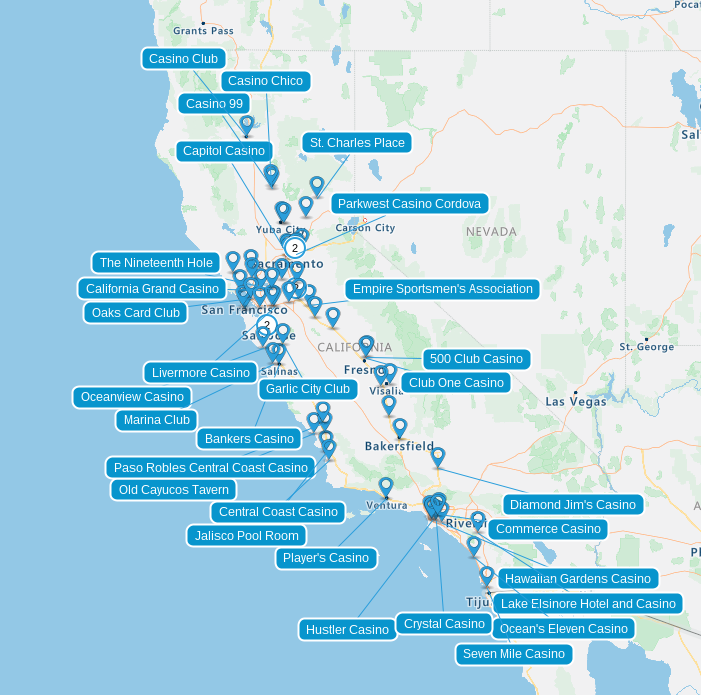 According to the California Gambling Control Commission, there are currently 84 actively licensed card rooms in the state of California, however, only 57 card rooms are currently operational. The pandemic brought significant challenges to the gaming industry. Nationwide mandates enforcing public health and safety procedures brought every casino, card room, bingo hall, and betting venue to an operational halt.

Once in-person safety procedures were established, some gaming locations were able to install safety barriers, provide PPE, and implement health and safety precautions to operate within CDC guidelines. For the businesses that were capable of implementing these changes,  it allowed them to slowly reopen. With other unforeseen challenges and economic hurdles, it is understandable that ⅓ of our card rooms have not reopened in 2022.

If you take a look at our live map, you’ll find that the remaining operational card rooms extend from San Diego to Redding. These locations range in facility size, operating 1 table to nearly 300 tables. Rooms such as Commerce Casino, The Gardens, and Hollywood Park Casino are some of the largest poker operations in the world and house a handful of the most prestigious poker tournaments in the United States.

Find a full list of all the active card rooms in California below: